The right to parent one’s child is a constitutional right that the court’s take very seriously.  However, if a parent chooses to use corporal punishment or physically discipline a child, that parent is taking certain risks. 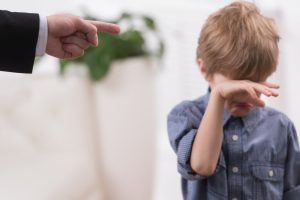 While it is historically acceptable to physically punish a child, it may not always be the wisest decision when facing a custody hearing or potential changes to custody in Michigan.

Can Corporal Punishment or Physically Disciplining a Child Cause a Change of Custody or Parenting Time?

The recent case of Brown v Brown, addressed this issue in the context of divorce and domestic violence.  In that case, the divorce court found that the father’s use of corporal punishment as a disciplinary method constituted domestic violence.

The court stated that however sacrosanct parental rights may be, they do not extend to abusing one’s children.  The state’s interest in protecting children from harm outweighs any religious beliefs regarding the propriety of corporal punishment.

It has long been established that a parent may not administer excessive physical discipline, or physical discipline that actually harms a child, no matter what the parent might subjectively believe.  It concluded that the divorce trial court properly considered the father’s use of corporal punishment to be domestic violence.  Domestic violence is a factor that must be explicitly considered in custody disputes.

The father in this case had sole legal and physical custody before the mother brought the physical discipline of the children to the attention of the court.  After the hearings, the court severely limited the father’s parenting time with the children. Therefore, the use of physical discipline is a bad idea of there is any potential of a divorce, legal separation or custody case.

Best Interests of the Child?

Because Michigan parenting time and custody decisions are based on the standard of the “best interests of the child”, judges are given much leeway in determining how to handle different situations. Some Wayne County judges may determine that light physical discipline is perfectly acceptable in the raising of children. Others may feel that any physical discipline is tantamount to abuse.

If the court feels that any spanking or other forms of physical punishment are abusive in nature, then the decision will most likely not be in the favor of the parent performing the disciplinary action. However, in some cases, it may not become an issue.

If corporal punishment is a part of your parenting strategy, you may want to try other methods leading up to your divorce. It may even be legally advantageous to take some parenting classes and document proof that you took them.

If you are heading for a custody hearing or have an impending divorce, it is imperative to have legal representation. Contact The Mitten Law Firm for a free consultation today.